It happened with little fanfare, with virtually no reporting by the mainstream press. But this development signaled that one of the biggest gold-buying entities sees a growing need to own gold right now.

Not only does it mean they will continue to buy, but their buying lends long-term support to the gold price.

A total of 21 central banks are part of the Central Bank Gold Agreement (CBGA), mostly in Europe. When it first started in 1999, its purpose was to “balance” conditions in the gold market by, among other things, coordinating gold sales among the various signatory banks.

Through 1999, gold had largely been in a bear market for almost two decades, and central banks were active sellers during the time. So the idea behind the agreement was to keep ongoing sales from spinning out of control and pushing the price down so much that it hurt the value of each bank’s remaining reserves. So a limit was set on both total sales and individual sales by member countries.

This agreement was renewed three times—in 2004, 2009 and 2014. With each new agreement, the caps on sales became less stringent.

The fourth renewal expires on September 26 this year, and thus a new one had to be signed by then. But we now know that the CBGA participating banks jointly decided NOT to renew the Agreement.

Why? For starters, they just weren’t selling gold any longer. Here’s the amount of gold sales from the participating banks during the life of the CBGA. 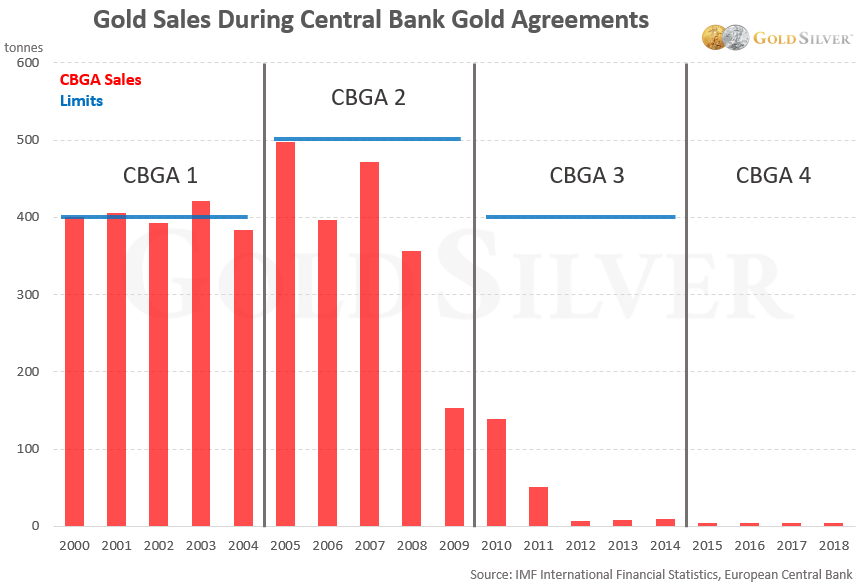 You can see that sales have virtually dried up. Member banks have sold only insignificant amounts of gold over the past eight years.

In the European Central Bank’s statement, it confirmed this trend would continue: “None of the signatory banks currently have plans to sell significant amounts of gold.”

In fact, as I’m sure most of our readers know, central banks have become net buyers of gold.

You can see that global gold reserves have risen in each of the past 11 years. Without fail, central banks have added to reserves every year since 2007. And 2019 may be a record-setting year, since purchases year-to-date have exceeded 400 tonnes, the fastest pace of accumulation since 2015.

You’ll also notice that global holdings would have to climb another 13.6% just to match what they held in 1965.

All of this corresponds to the changes in the Basel III rules that went into effect March 29th this year: gold is now officially treated as a Tier 1 asset (in other words, zero risk). The Bank of International Settlement (BIS) now recognizes central bank gold holdings as a reserve asset equal to cash. (Prior to this gold had been considered a Tier 3 asset, which meant its value was reduced by 50%).

These two developments send us a clear signal: as a group, central banks expect to be net buyers of gold, not sellers. They see gold as an increasingly critical asset to own.

The two biggest buyers of gold in terms of volume have been the central banks of China and Russia.
Gold now accounts for almost 20% of Russia’s reserves. Only about 3% of China’s. Combined they own 134.16 million ounces of gold.

The both have incentive to buy gold—Russia for ongoing sanctions and China for the ongoing trade and currency wars. But regardless of the reason, the net effect is the same: they see gold as a currency diversifier and protector and continue to load up.

It doesn’t appear this trend will let up, either. Russian President Vladimir Putin signed a law eliminating the value-added tax (VAT) on investments in gold and other precious metals (it excludes coins but the central bank doesn’t buy coins).

And for what it’s worth, Russian newspaper Izvestia estimates that over the next five years gold demand could surge an additional 50 tonnes per year, which would represent an increase of 15 times current levels. “Investments in gold will become one of the main ways of accumulating funds in the state treasury since the metal is protected from the U.S. dollar inflation” said the paper.

China’s interest in gold is even more unrelenting. Consider that…

The Central Bank of You

The point to all this is that as of now…

Central banks have officially abandoned coordinated gold sales… they officially recognize gold as a Tier I asset… and they continue to aggressively buy gold, which lends support to the price. This all has long-term effects.

We can be our own central bank, too. Just make gold a “tier 1” asset in your portfolio by buying enough to withstand the kind of turmoil we think is ahead. And even come out with a wonderful profit.

It’s a new era for gold, ladies and gentlemen. It’s just getting started, and I hope you, along with all of us here, will be part of it.

3 thoughts on “These Gold Investors Got Your Back, Jack”